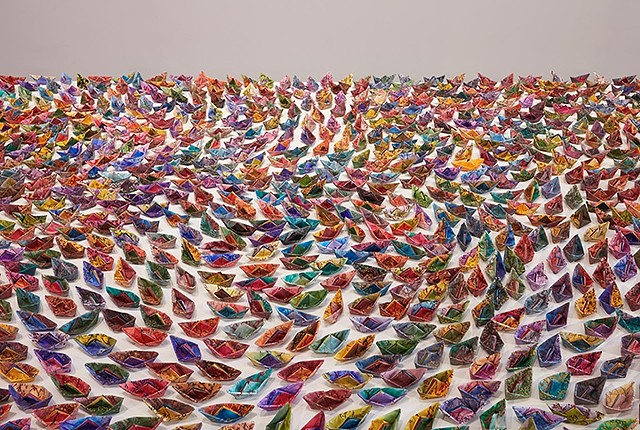 These boats represent migration and journeys that we all have taken as humans have migrated since the origins of humanity. Today we are bombarded with images of desperate refugees fleeing war torn countries and migrating to western nations, however we all migrate. It can be to different neighbourhoods, new cities, states and many times to different countries. We commonly think of migration due to political reasons but many times we moves for reasons such as educational opportunities, job and simply new experiences. The purpose of this installation is to celebrate migration

The boats represent the journey, when we are in between places. The process of making the boats is a meditation just as we enter a meditative state while we are on our journey.

I chose to make 1001 boats to reference 1001 nights. A book that is a collection of folk tales from the Muslim world. Specifically, the work was collected over many centuries by various authors, translators, and scholars across West, Central, South Asia and North Africa. The tales themselves trace their roots back to ancient and medieval Arabic, Persian, Indian, Egyptian and Mesopotamian folklore and literature. The book is narrated by a strong female figure named Sherezade.